As I was cleaning out old email, I found a comment Steven Nicoloso made regarding cursing. Since this topic was recently addressed here, I thought I'd share the comment.

"What I'd propose is a four-ary breakdown, a spectrum, of Dangerous Words, recognizing of course that even the strongest word is inherently weaker than the weakest meaning and intention."

"1) Objective Violation of the 2nd Commandment–vain use of God's name: YHWH, Jesus, Christ, maybe others, uttered either as a curse or a intentionally false oath. This is, I think, always a grave matter. I'd don't think I'd count the exclamation 'god' as a per se' violation here since that is not God's name."

"2) Cursing Proper–invoking deity or other holy thing or attribute in vain generally or with a specific eternal intention. Here we would find utterances such as god, goddamn and possibly hell, if the intent is to say dammit to hell. Possibly in this category we might find things like 'Holy Moly', but such utterances seem more nonsense than actual profanity. I guess if Moly was a real, unholy thing, then maybe. Dangerous words of categories (1) and (2) are both types of profanity proper. But type (2) fails to be obvectively grave, depending on the circumstances. Damning or wishing hell upon something detestible like, say, sin or heresy or a possibly rotten money-pit of a car or the pain of your thumb once hit by a hammer is not necessarily an evil, unjust, or vain desire. In some cases it is a positive good. Of course we should never wish, not even jokingly, damnation or hell on any person, so certain uses are definitely wrong. Type (2) Dangerous Words are still extremely dangerous and we should definitely not be in the habit of uttering them willy-nilly, just 'cause we feel like it."

"3) Obscenity Proper–these are words that refer to conjugal relations and associated body parts, having often or generally a lascivious connotation. Oddly two of these (less dangerous dangerous words) are among the 3 most taboo in the English language… one beginning with F and referring to copulation and the other beginning with C and referring to female sexual anatomy. Others here include 'd*ck', various erectile euphemisms, euphemisms of sexual position and exploit, &c., &c.. Sexuality is perhaps the richest soil for the development of slang in the English language (I suppose we should thank either the Victorians or the Puritans for that… perhaps both.) Use of words and themes in this category is dangerous, but sometimes called for. They should be used judiciously and precisely for their shock value and/or their fine ability to convey shades of meaning not readily offerred by other nouns or adjectives. Paul's angry reference to removal of the male member in Galatians falls under this category, I think."

"4) Mere Offensive Words–in this category are all the rest and run a gamut from silly (and perfectly innocent) euphemisms for excrement, urine and vomit, to much more potentially wicked terms such as racial slurs. With these words, it depends entirely upon the intent of the communication. Obviously to intend a racial slur is extremely wicked and extremely grave. To refer to a destable thing by some euphemism indicating excrement may be perfectly justified, even laudable in the right circumstances. St. Paul's reference (Philippians) to the fleshly things he valued in his former life as a Pharisee as skubalon ('sh*t') is an example of this kind of usage." 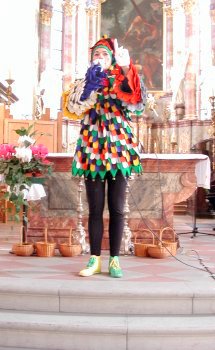 Today’s Old Testament reading ought to be referenced in documents regarding liturgical abuses. If it already is, please let me know.

“‘And now, O priests, this command is for you. If you will not listen, if you will not take it to heart to give honor to my name, says the LORD of hosts, then I will send the curse upon you and I will curse your blessings. Indeed, I have already cursed them, because you do not lay it to heart. Behold, I will rebuke your offspring, and spread dung on your faces, the dung of your offerings, and you shall be taken away with it. So shall you know that I have sent this command to you, that my covenant with Levi may stand, says the Lord of hosts. My covenant with him was one of life and peace, and I gave them to him. It was a covenant of fear, and he feared me. He stood in awe of my name. True instruction was in his mouth, and no wrong was found on his lips. He walked with me in peace and uprightness, and he turned many from iniquity. For the lips of a priest should guard knowledge, and people should seek instruction from his mouth, for he is the messenger of the Lord of hosts. But you have turned aside from the way. You have caused many to stumble by your instruction. You have corrupted the covenant of Levi, says the Lord of hosts, and so I make you despised and abased before all the people, inasmuch as you do not keep my ways but show partiality in your instruction.’ Have we not all one Father? Has not one God created us? Why then are we faithless to one another, profaning the covenant of our fathers?” – Malachi 2:1-10 (ESV)

END_OF_DOCUMENT_TOKEN_TO_BE_REPLACED

A couple days ago, I wrote about the A Form of Sound Words post about “synthetic cursing” and the response from

the Baptist. Today I will.

END_OF_DOCUMENT_TOKEN_TO_BE_REPLACED

"[I]f a Catechumen ask thee what the teachers have said, tell nothing to him that is without. For we deliver to thee a mystery, and a hope of the life to come. Guard the mystery for Him who gives the reward. Let none ever say to thee, What harm to thee, if I also know it? So too the sick ask for wine; but if it be given at a wrong time it causes delirium, and two evils arise; the sick man dies, and the physician is blamed. Thus is it also with the Catechumen, if he hear anything from the believer: both the Catechumen becomes delirious (for he understands not what he has heard, and finds fault with the thing, and scoffs at what is said), and the believer is condemned as a traitor. But thou art now standing on the border: take heed, pray, to tell nothing out; not that the things spoken are not worthy to be told, but because his ear is unworthy to receive. Thou wast once thyself a Catechumen, and I described not what lay before thee. When by experience thou hast learned how high are the matters of our teaching, then thou wilt know that the Catechumens are not worthy to hear them. "

"Do not give dogs what is holy; and do not throw your pearls before swine, lest they trample them under foot and turn to attack you." – Matthew 7:6