From Al Kimel, the Pontificator:

The Salty Vicar has published the following letter he recently received from an individual inquiring into the Episcopal Church:

I am seeking to learn more about the Episcopalian Church. I am currently taking RCIA classes at my local Catholic church and want badly to convert but am assailed with doubts for the following reasons: the Church’s stance on divorce, birth control, abortion, homosexuality and women as priests. I am a liberal and cannot and will not betray my conscience by accepting the teachings of the Church hierarchy that I view to be implicitly wrong. I love Christ will all my heart and long to serve him, but don’t know if I can reconcile my personal belief system with these teachings, not to mention the overall alarmingly conservative outlook of many Catholics. I know that many former Catholics have become members of the Episcopalian Church. Do you know of any yourself? Is it true that many have become members since Pope Benedict took his place in the Holy See?

I have encountered some Catholics online who are progressive and share my views but they seem to be the minority, alas. I’m feeling pretty lost right now and I don’t know where I can find a home, so to speak, a church that will accept and embrace my views. I love so many aspects of Catholicism, the dignity of Mass, the sacraments, the emphasis on social justice, but don’t want to feel as if I’m living a lie but rejecting other teachings. Does the Episcopalian Church offer the sacrament of Reconciliation? I don’t know if I could stand to leave this behind. Thanks for taking the time to read this.

I applaud your commitment not to betray your conscience “by accepting the teachings of the Church hierarchy” that you believe to be wrong. The Catholic Church teaches that the conscience is the voice of God and therefore a person should and must obey his conscience, even though it is possible that he may have misheard the divine voice. “It is never lawful,” Cardinal Newman writes, “to go against our conscience.” However, we also have a moral obligation to inform and train our conscience. How are we to do so?

You write that you disagree with the Catholic Church’s positions on divorce and remarriage, birth control, abortion, homosexuality, and the male priesthood. May I suggest that you bracket these convictions for a moment and consider a more fundamental question: Is the Catholic Church who she claims to be? This question must be asked and answered before you can reasonably address the specific teachings of the Catholic Church, for if the Catholic claim is true, then you will be forced to reconsider your present beliefs… 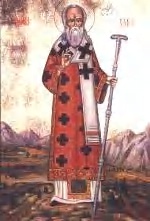 I’m of Welsh descent, so this story caught my attention. (Fedora Tip: Connexions)

"Wales has the perfect excuse for a triple celebration of St David’s Day this year. The traditional festivities…will be on 1 March as usual. But a clash with a major Christian festival means the [Anglican] Church in Wales has moved its celebrations to 2 March. And the Catholic solution to the problem, a clash with Ash Wednesday, is to move St David’s Day to 28 February."

Today, Pontificator posts an 1848 letter of John Henry Cardinal Newman to one Mrs. Froude, which reflects deeply on conversion and faith. It resonated with me as one in the midst of a not altogether smooth conversion to a church that audaciously claims it is the One and Only Church founded by Christ from a church that, finding no virtue in audacity, believes no such Church exists.

END_OF_DOCUMENT_TOKEN_TO_BE_REPLACED

"While Anglicans — especially Anglican bishops or priests — becoming Roman Catholic after disagreeing with their community’s stands on ordaining women or openly gay men has made news, the movement of Catholic priests and laity to Anglicanism seldom makes headlines."

Sounds good to me. Both sides get what we want. Better yet, with a constant influx of heretics, the Anglican Communion will continue to destroy itself from within, leading to more their orthodox folks coming to Rome. 🙂

…and why am I in a handbasket?

(Fedora Tip to Connexions for both)