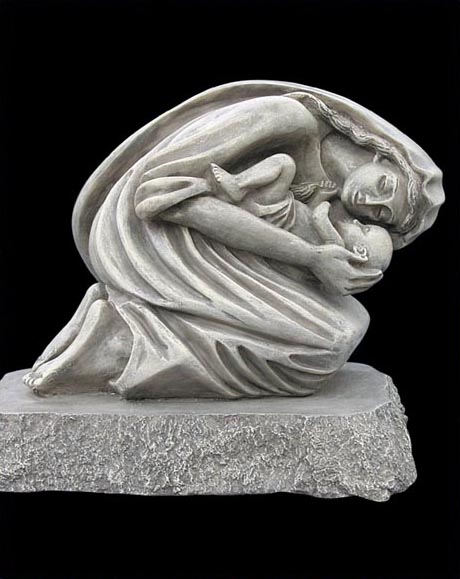 Hot on the heels of one controversial pro-life statue, we have another.

“A SCULPTURE OF the Virgin Mary and baby Jesus, proposed as a ‘memorial for the victims of abortion’ at Villanova University, has upset some students, including some who oppose abortion.”

“Pro-life freshman Clint Gilliam agrees with the concept of the statue, but thinks its high-profile placement is a bad idea. ‘It’s just a little in your face,’ he said. ‘It sort of makes people who don’t believe in those things uncomfortable.’ Adds freshman Peggy Costello, ‘I’m personally pro-life and I don’t like the statue at all.’ ‘I feel that putting up a statue like that completely counters the diversity we’re trying to advocate or uphold,’ said Costello, 19, who thinks the memorial could alienate non-Catholics.”

Villanova is a Catholic university for heaven’s sake! There should be no need whatsoever to justify a tasteful pro-life statue, especially one with of Mary and Jesus.

Uhhh…OK…This just has to be seen to be believed.

Monument to Pro-Life: The Birth of Sean Preston

Here’s an interview with the artist.

END_OF_DOCUMENT_TOKEN_TO_BE_REPLACED

Most of the content in Pittsburgh City Paper is a bit raw, but this article is interesting and respectful.

My office looks out over I-376 to the hill next to Bates Street. During the winter, I noticed wooden crosses and a white sculpture that looked like the Virgin Mary on the hillside. What is it?

You are not the first to have a vision of the Virgin Mary on that spot, though in its long history of religious visionaries, you may be among the few to identify a two-foot-tall statue from across a six-lane highway.