I know this
is a few days late, but this meditation has been brewing all weekend through my
busy, hectic workdays and my dear husband’s slow ones. But this is not for him – he already got the
Star Wars trilogy for Father’s Day and one custom card complete with a
hand-drawn Darth Vader from our six-year-old.

No, this is
for the Fathers that probably don’t get many chances to go fishing or get
pancakes in bed or have grand cookouts for Father’s Day. This is for priests.

END_OF_DOCUMENT_TOKEN_TO_BE_REPLACED

Of all the heavy debates on Catholic Liturgy that seem to cause a threatening snarl and an intimidating stripe of raised hair down the backs of even the most gentle child of God, that on appropriate music is the only one which actually causes yours truly to bite. I am no theologian, nor expert on Church documents. I am, however, a musician and a Catholic. As such, I care enough about this debate to investigate suggestions I find contrary to what I have been taught or have come to believe on my own.

This article from an Australian Catholic newspaper made a few such suggestions that rubbed me the wrong way. Fortunately, the author’s arguments are made based on segments of the General Instruction of the Roman Missal (GIRM), which is easily accessible from the USCCB website. Upon reading the document, I found (as I hope you, the astute reader will, too) much of the article’s conclusions to be taken out of context.

END_OF_DOCUMENT_TOKEN_TO_BE_REPLACED

When Funky encouraged me to write a post about my desire for a large family and my friendships with people who already have large families, I could hardly believe my good fortune: this is my opportunity to fulfill my subversive plot to…..(cue B movie horror music)……change Ales Rarus into a MOMMY BLOG!!! (maniacal laughter echoing). It’s only my second post, but this time, it’s personal.

I am not one of those baby-crazy women whose biological clock ticks so loudly that her husband smacks her in the morning when the alarm goes off. In fact, I never really pictured myself as a mother at all when I was growing up – I shelved dolls in place of snuggly, cuddly stuffed animals and dreamed of being a veterinarian. In high school, my career choice shifted, but not my interest in children – I rarely babysat and wasn’t sure I’d ever really marry. After a relationship with a really bad-for-me boyfriend, I felt sure I’d either be a single missionary or a cloistered nun. Sometimes I thought I’d be a concert pianist. The only thing I was sure about was that I wanted to serve God. Of course, if, by some act of God, I ever did get married, I knew I would want to bear my husband’s children.

Enter Squat. The man who turned my world upside-down, taught me what love was and that yes, men were really capable of it, and eventually took me as his bride. We did NOT conceive on our honeymoon, contrary to popular belief. It was the week after we got home.

Now, I had always been pro-life, and supported the Church’s teachings against contraception and whatnot. But at this point, I was scared $#!%-less. I understand how women can be talked into abortions. I was in my 5th year of pharmacy school, freshly married, and dirt poor. And as the youngest of five children in a family that puts the FUN in dysfunctional, I wondered what God could possibly be thinking giving someone like me something so fragile and impressionable as a baby. To top it all off, I was turning my stomach inside out and scraping the contents on the pavement on a regular basis. More than once someone who “knew me when” has told me that if SHE had been as sick, she would have stopped after one.

So how does someone like me end up actually desiring a bunch of babies? How did I go from feeling sure I would turn into my mother and leave my children requiring lifetimes of therapy to trusting that my little ones will probably be OK? How did I go from wishing I were dead to accepting “morning” sickness willingly?

END_OF_DOCUMENT_TOKEN_TO_BE_REPLACED 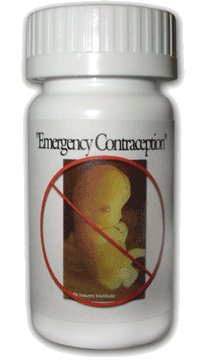 There has recently been a great push in the world of women's health to consider prescription birth control (oral contraceptives, IUD, DepoProvera, etc.) not only a "right" but indeed a necessity – the "standard of care," if you will. The fact that ever-growing numbers of registered pharmacists are refusing to fill legal prescriptions for such birth control has caught the attention of quite a few powerful pro-choice and "feminist" groups, who have made it their goal to force such professionals by law to fill all such prescriptions with no questions asked. As a practicing pharmacist, I would like to try to address this issue.

END_OF_DOCUMENT_TOKEN_TO_BE_REPLACED

At my 21-week prenatal appointment, my doctor asked if I had read the August edition
of Prevention magazine, and urged that I do so, as she is mentioned in one of the
articles, though not by name.

My gynecologist is the only one in the Allentown, PA area that is 100% pro-life
in support of NFP, and will not prescribe hormonal contraceptives (i.e. the pill).
She and other doctors like her, as well as pharmacists like myself who refuse to
dispense the pill and other contraceptives, are under major slanderous attack in
an article entitled “Access Denied.”

The article, which is quite long and involved, states that access to birth control
is a basic right in the world of women’s health and those of us who will not participate
in its distribution are denying women the proper standard of care. The quote that
burned me the most was from a woman who could not get her “last-minute”
pill prescription filled at a CVS – “I don’t think pharmacists should be in
a position to make that decision.” Yet any pharmacist who dispensed a teratogenic
(i.e. harmful, possibly fatal to an unborn child) medicine to an obviously pregnant
woman would face a lawsuit the size of Texas!!!

I’m obviously heated on this issue. In any case, what I’m asking of all of you is
first of all to pray! Pray for all those in health care under fire for this issue,
and for those beginning health care careers who will face tough decisions about
this matter. Secondly, for all those who like to be active and speak out, I’m asking
you to, if possible, pick up a copy of Prevention magazine for August 2004, read
the article, and flood the
editors with letters to the contrary! The good news is this article would
not have been written if those who support abortion and birth control were not scared.

Women reading an article like this are bound to be misinformed and/or uninformed
about the truths (and lies) concerning birth control. I’m going to do my best to
help them find out the facts and defend my profession.