I’m supposed to love my enemies, and spammers are enemies, so I guess I have to love them. Crap. Why, Lord, why? Spammers are so evil. *sigh*

The related problems of spam and splogs have been getting worse recently. I’ve had to up the security ante. Here’s a list of the anti-spam plugins I’m using. If you run a WordPress blog, you might want them, too.

Would it be a sin to maim a spammer or are spammers not really people – like mimes? 😉

AntiLeech does not prevent the splogger bots from accessing your site. It produces a fake set of content especially for them that includes links back to your site (and mine, too, ok?) and sends it only to them. When they steal this content, it appears online just like normal, except now you've turned the tables on them and have provided them with useless content.

I've been using it for a couple weeks now and am quite pleased. It detected the Pittsburgh News (not to be confused with Pittsburgh Bloggers) user agent and I have instructed it to deliver gibberish to that agent. 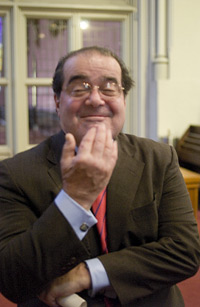 OK, so Justice Scalia was gesturing to reporters, a subspecies of homo sapiens slightly less annoying and more evolved than spammers. Still, the gesture sums up neatly my feeling about spammers, especially now that Blue Security has wussed out.

"Israeli anti-spam firm Blue Security is ceasing operations after a crippling series of attacks launched against its services earlier this month by a Russian spammer named PharmaMaster."

"The episode serves as an alarming reminder of the challenges involved in dealing with spammers and the resources the spammers have at their disposal to deter those trying to stop them, analysts said."

"In a statement, Blue Security, which has its U.S. headquarters in Menlo Park, California, said it can no longer ‘take the responsibility for an ever-escalating cyber war through our continued operations’."

"’As we cannot build the Blue Security business on the foundation we originally envisioned, we are discontinuing all of our anti-spam activities on your behalf and are exploring other, non-spam-related avenues for our technological developments,’ the company said." 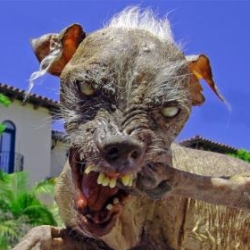 This sucks. I really liked Blue Security’s idea of giving spammers a taste of their own foul medicine. Unfortuntely, they were ill prepared for the consequences of their efforts. So instead of gearing up for a prolonged battle, the folks behind Blue Security cried uncle gave up. Tiny dogs are often rather fiesty and provoke bigger dogs, but when the bigger dog takes notice and asserts itself, the little dog quivers like jello and pees on itself. Blue Security was that little dog. Thanks for nothing, you cowards.

By the way, the big dogs didn’t just frighten away their yipping diminutive adversary, they killed it and devoured its corpse.

Well, until a big dog with big cajones comes along to eviscerate these foul beasts, at least there’s still SpamCop.

No, the title of this post does not mean that I’ve joined either the Creationist or ID camps. However, spammers certainly seem to be an evolutionary step backwards. It’s a shame spamming doesn’t give one leprosy. At least that would reduce their chances of reproducing.

"They may’ve signed up for the service to stay free of unsolicited e-mail, but people in Blue Security‘s "Do Not Intrude Registry" are getting spammed, the company said Wednesday."

One of my addresses has been one of those victimized. !@#$ wretched villainous scum. I wonder what kind of penance I’d get for castrating someone with a dull spoon…

Update 05/06/06: Here’s a timeline of PharmaMaster’s attack on Blue Security and members of its community.

"Everything was fine with our system until the power grid was shut off by d***less here."

God help the first spammer I meet in person…