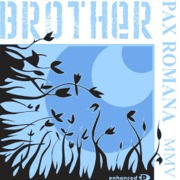 As promised, here’s my review of Brother’s Pax Romana MMV. The grading scheme is as follows.

This band’s sound at the start of this track, particularly the guitars, is reminscent of their 1997 release Digging Bone

. The up-beat bagpipe-drive bridge harkens back to Black Stone Tramp

. The talking bits (something about a cocoon) are lame but not as bad as they are on Urban Cave, though they get close. This is a simple 4/4 rock tune with a singable chorus and a fun danceable bit in the middle. It anticlimactically trickles to an end, though. All in all it’s a rather forgetable song. Score: 3/5

I like the penny whistle and the driving, urgent beat. It’s a pretty singable song with nice harmonies. I really did not care for the lyric "got to get my shit together". It’s mild profanity, but it’s just so out of place for a band that to my knowledge has never used any and never needed to. The speed up and fast talking/singing at the end is cool. The overall sound of this track strikes me as a blend of The Digging Bone and Your Backyard

I really dug the middle eastern chants. Unfortunately, like some of the best songs on Urban Cave, this is a cool song that’s far too short. Why do they tease me like this? Score: 4/5 (lost a point for brevity)

This is a rather boring trippy hippy song. The first verse is nearly unintelligible. The second verse is spoken. Lame. The tune for the remainder isn’t particularly catchy. It’s essentially a decent poem ruined by mediocre music. Political music is fine, fellas, but at least make it entertaining. Score: 2/5

This track reminded me a little of the music from the orginal Prince of Persia video game (which I very much liked). The sound is very dark, brooding. The treatment of middle eastern sounds is much better here than on "Elbauta" (track 8). Ultimately, the song doesn’t go anywhere, which is disappointing considering how much potential it had. Score: 3/5

This ballad starts off sounding a bit like "Purple Haze" (Your Backyard) or "Believe Again" (i you you me). The choir of children is a nice touch, but bordering on cheesy (like "We are the World"). The song’s a bit repetitive, having little lyrical substance. Score: 3/5

What the heck?!? When I saw this track on the listing, I got excited. "Hang On" is one of my favorite tunes from Brother’s post-Fergus repetoire. I was fooled, though. This a boringly arranged 1-minute snippet. Where’s the full song, guys? It’s never been on an album, which is truly a shame. Score: 0/5  Download the demo version here.

Ok, more middle eastern beat. I guess that’s the theme of the album. It’s too bad it’s so dull on this track. The spoken samples gave me awful flashbacks of the worse moments of Urban Cave. This track is repetitive, boring, and goes nowhere. Perhaps I’d like it better if I were a stoner. Score: 2/5

This is another disappointing album from one of my favorite bands. While none of the tracks are as jarringly bad as the worst of Urban Cave, at least that album had more enjoyable tracks. This album is easily summed up as "forgettable". I eagerly await their forthcoming greatest hits compilation. I’m sure it won’t be as good as my two disc compilation, but at least I’ll be reviewing something worth listening to.