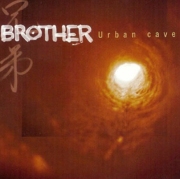 Brother is one of my favorite bands. The following is a slightly modified version of review of their 2003 release "Urban Cave". I’ll be posting a review of their latest album "Pax Romana MMV" soon. The grading scheme is as follows.

My initial reaction to this album was "Who the hell made this crap and where’s Brother?!?" After listening to it a few times, I got used to most of it, and quite liked some bits. My overall impression are that it’s too short, too electronic, too dark, and too slow. Here’s a track-by-track breakdown:

The instrumental intro is really cool, but the rhymed lyrics after it strike me as amateurish. After the first verse, the song is an interesting listen and kind of catchy. I’m not sure I like the rapped bridge, though. Some days it’s OK. Other days it really annoys me. Score: 3/5

I haven’t reversed the back-tracked vocal opening yet, so I don’t know what’s said. I didn’t get to hear this song many times in concert, but I’m almost positive that is was "lighter". The musical feel was darker than the lyrics seemed to warrant. It’s not a bad song, but it just seems "off" somehow. Score: 3/5

I enjoyed this track and thought it would be a good radio single (and a hell of a lot better than a lot of the crap hogging the airwaves these days). All around, this was a good track. Score: 3.5/5

The I really enjoyed this track except for two things. I cannot fathom the significance of "This is not an exercise" and the klaxon at the end is grating and irritating. Score: 4/5

I love this song! It’s catchy, upbeat, and well-balanced (between effects and instruments). Did anyone else think the song had a U2 feel? There are two big problems, though. "Ah there is is" doesn’t really sit well with me; why in the world is the song so short?!? Score: 4.5/5

Why did they feel the need to remake this song? It wasn’t a real winner to start with. Now the lyrics have been simplified and the beat sounds like bad disco. The chorus is pretty catchy, but it’s just too simple. I just keep wondering where I’m supposed to be flying and why. Furthermore, the effects and samples were irritating. The scratch that sounds almost like a camera shutter was like fingernails on a chalkboard to me. Score: 2.5/5

Ahhhhhh!!!! They’ve killed it! They’ve killed "Bitch"!  This song is absolutely awful. The effects drove me nuts (Noticing a trend, folks?). The song has lost all "rock". I miss the ass-kickin’ guitar riffs. I miss the "urgent" feel of the original. Lastly, what the !@#$ is up with the zoo sounds near the end of the song?!? Score: 1.5/5

This track had real potential to be groovin’, but it just stops dead after half a minute. What’s the point in teasing us? Then again, 30 seconds of this is better than 3 minutes of "Inside of Me". Score: 2.5/5 (points lost for length)

["Lonely With You" is a retooling of "Lonely", which originally appeared on "Your Backyard" in 1999.]

Another remake – why?  This one isn’t too bad. It’s a tolerable listen and the end kinda rocks. Again, the music doesn’t seem to match the lyrics. The original seemed desperate without being psycho. I really identified with it since at the time I was in love with a girl who didn’t love me. Most of this version has a hippy acid-trip vibe to it. Score: 3.5/5

Compared to other "angry" Brother songs, it’s not their best. I prefer "Chains" (from the 1995 album "Exit From Screechville"). On its own, though, it’s a very good track. I really liked the cello. Score: 4/5

This wasn’t as butchered as "Bitch", but it’s still not as good as the original. It’s not as bouncy or fun as before. I also really miss "And I don’t want that hangin’ over me" and "And when you come to think again, you’ll wonder what it all meant. And when you think again, perhaps you’ll find you’re just as bent." Ultimately, what this version lacks is the "anthem" quality that the original had. Score: 3.5/5

This solid tune’s only real flaws are the weak and seemingly out of tune vocals at the beginning and the abrupt ending. Score: 3.5/5

Anybody else think the opening sounds like music from a horror video game? At this point in the album I’m about to go postal. We’ve been waiting this freakin’ long (since ) for new Brother material and we get a bunch of pathetic remakes!?! I never loved the original, but it was certainly fun to sing along with at concerts. Score: 3/5

In conclusion, I’d like to mostly praise the new tunes and lament the remakes. I find myself wondering why the album is an anemic 43 minutes. I know there’s more material to release. I really wanted "Hang On" and "Give It Away". In the end, though, Brother music is like pizza – even when it’s bad it’s good.