Well, apparently the rumors were true this time. I guess you can’t refuse promotion forever.

" Archbishop-designate Wuerl will continue to serve as bishop of the Diocese of Pittsburgh until his installation as archbishop of Washington on June 22, 2006."

Bishop Wuerl had the following to say about his promotion.

"The decision of our Holy Father, Pope Benedict XVI, to transfer me to the Archdiocese of Washington, DC, is one I embrace in the context of faith in God’s providential care. Although I am greatly aware of my own limitations, I find strength in the Pope’s trust in me and also in the prayerful support I have always found from the Catholic faithful I have attempted to serve here in the Diocese of Pittsburgh."

Here’s a summary of his pastoral letters.

Here’s what St. Blog’s Parish has to say about him.

I wonder who’ll replace him. Will an auxilliary bishop be elevated? Will someone be transferred from another diocese? Will the replacement desire more indult masses? In a perfect world, Father Bryan Summers would be elevated, but this is not a perfect world. 😉

What are your thoughts on possible replacements?

Addendum: American Papist has links to more coverage than you can shake a crozier at.

Cardinal McCarrick believes he will be retiring soon. There’s talk of Bishop Donald Wuerl replacing him. That greatly displeases some people. What are your thoughts?

"There seems to be in both extremes [of creationism and unguided evolution] an ‘either/or’ mentality: either everything as we know it was created as it is now by God in the beginning, or there was no creation or God of creation at all."

"One can very comfortably believe that God is the Creator, and also hold the theory that creation had within it the seeds of an evolutionary development that would take place over eons."

Creationism is a belief founded in faith and has no place in a secular scientific classroom. The logical consequences of creationism’s claims (such as earth being only thousands of years old), however, can be tested like any other scientific hypotheses and be proven or disproven (I suspect the latter). On the other hand, evolutionary theory goes too far when stating that the underlying processes are entirely random. At best one can state that they appear to be random. A great number of phenomena appear to be random, but are actually quite deterministic in nature. Actually, to honest, there is a great deal of ambiguity in the term "random". A process can be random and still be highly predictable. Scientists take advantage of this whenever they state that a process has such-and-such distribution. IOW, one can predict, with varying degrees of precision, future values of variables. Also, some processes may appear random but only really be pseudorandom, such as "random" numbers generated by computers.

What am I getting at? I’m saying that both sides, at least as presented by the media, are wrong. Creationism doesn’t belong in schools and evolutionary theory cannot prove that perceived randomness is truly random rather than only pseudorandom. Thus, introducing "intelligent design" into science classrooms is unnecessary. Teachers need only make room for guided evolution by not assuming more or less causality than the data indicate. If fundamentalists want to go farther than guided evolution, they should either not send their kids to public school. Either that or be willing to have their kids taught a broad variety of mythological creation stories from religions representative of America’s cultural and religious diversity.

Here’s a picture of me with the St. Paul Cathedral and Pittsburgh Oratory combined RCIA class of 2005 and Bishop Donald Wuerl. The angle isn’t so great, but there were other pictures taken from the direction everyone is looking. As soon as I have one of those, I’ll post it, too. 🙂 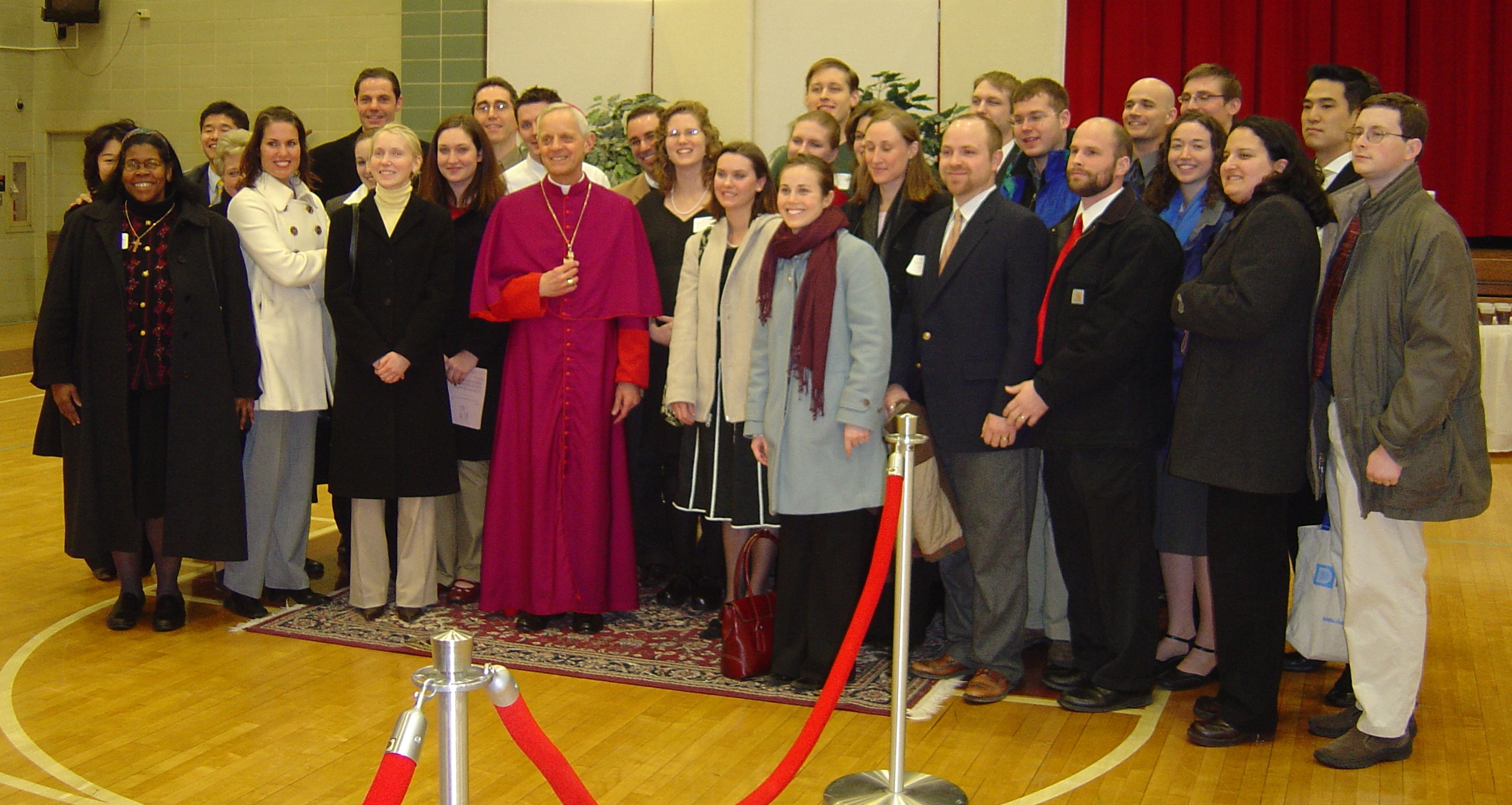 [I’m a big fan of giving a voice to those who lack a forum, so here’s another piece by Shaun Pierce. In response to an ad in The Pittsburgh Catholic opposing single-issue voting, he wrote the following. – Funky]

Strangling Ourselves
By Shaun Pierce

Is anyone steering the Catholic ship? Or are we all dancing in the ballroom while the ice burg floats dead ahead?

After learning about the ad that ran in the Pittsburgh Catholic newspaper, words cannot begin to describe how disappointed, disgusted and abandoned I feel by some of my Catholic brothers and sisters right now. The ad teamed up local priests, the Association of Pittsburgh Priests and other so-called "Catholics" in what amounted to a "read between the lines" endorsement of. Sen. John Kerry.

My entire life, I have been taught moral right and wrong through the Roman Catholic Church.  We have seen evidence of a "do as I say, not as I do" mentality, but now that has been reduced to telling the faithful they don’t even have to do as the church or Christ says.

I have often wondered how one could be in Catholic leadership and not scream the teaching of the church over the noise of the world. Yet I can see how one could be hesitant these days knowing those around you would not support you and may even censure you. Stand against homosexuality and you are a bigot. Vote pro-life and you are narrow-minded. Call yourself a Catholic and some wonder if you are even a Christian.

If you peer though the stained glass windows of the Catholic Church today you might wonder what they are stained with. It used to be the blood of Christ but it seems to have been replaced with a social gospel that overwrites the salvation message. Or maybe it’s ecumenism that transforms the church into a generic faith with little or no difference from any other religion.

The Catholic Church is under attack from the inside out. Forget "Catholic Bashing" if you give us some time we will strangle ourselves with our own hands. Without teaching and upholding basic truths, it’s no wonder many have lost their faith in the Catholic Church and in some cases, Christ himself. We are propagating our own extinction!

Just because you slap a "Catholic" label on something does not mean the world must bow. Yet the Catholic church and in particular Bishop Wurel seem to do just that. I, as a Roman Catholic, am required to accept the authority of the Bishop. However, I’m also free to respectfully ask questions of him.

Like why he would engage in dialogue with the Association of Pittsburgh Priests, a group that constantly and publicly opposes the Vatican on issues of ordaining women, homosexuality and married clergy? Or why the Masonic headquarters in Ross Twp. was built on property owned by the North Side Catholic Cemetery? Or why was it that a so-called "catholic" homosexual group used two Catholic parishes? Or why was it that St. Paul’s Roman Catholic Cathedral was the location for the consecration of Rev. William Duncan as Bishop of the EPISCOPAL DIOCESE?

I sent a letter to Bishop Wuerl on May 26th of this year asking him to explain why Catholic politicians who support legalized abortion should not be denied Holy Communion. I have yet to get any response.

We sit with a puzzled look wondering why Catholic School enrollment is declining? Yet a deaf ear is turned to parents who voice concerns over the abandonment of spiritual teaching.  Even as adults that teaching is pushed aside of new age ideas, put your conscience above the word of God and let’s blend all religion into one.

I’m some sure some will ask. "Then why remain Catholic?" The answer to that is simple. If a baby has a dirty diaper do you throw out the baby? No, you change it. This election has brought into the light a much bigger question then who will lead our country. The question is who is leading our spiritual life? There are some who have proved they should not be in any church leadership role. If only we could vote them out of office!

My heart breaks for all good and faithful Catholics who seek to be true servants of Christ. We are in a desperate battle for our faith and identity against ungodly education, homosexual advocacy, destruction of schools and parishes, sex scandals, ecumenism, multi-centralism, married clergy, politics, money and the consistent attack of the Faith from inside the church. God have mercy on those who seek to lead the faithful astray.