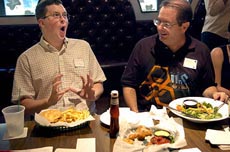 I mentioned yesterday that an article about Pittsburgh BlogFest 3 was forthcoming. I had no idea it would appear so soon. Nor did I know that I was going to feature so prominently. *blush* I also had no idea they'd use such an unflattering picture. 😉

To those who are reading my stuff for the first time I offer a hearty welcome. For more information about me and my blog, go here. Comments are appreciated and encouraged. 🙂

Now, on to the article… [BTW, It bugs me to no end that newspapers don't put links in online versions of stories. Any of the links seen above were added by me to give credit where it's due and save people a trip to Google. ;)]

"'Latin is already nerdy to the extreme,' Williams said, granting that the name of his blog is 'super-nerdy.'"

Like, fer sure, dude. Totally. I wonder if I really said it that way or the phrasing is just an artifact of writing from notes. I'll cut Mr. McNulty some slack and assume I'd have done as bad or worse in his shoes. 😉

"But introducing to that growing community to each other in person — instead of online — still has its challenges."

"'There are a lot of people I know here, and I have no idea who they are,' said Rob Carr, 47, a freelance writer and former city paramedic who writes the 'UnSpace' blog."

I had a very different perspective from Rob's. Rob is sort of the unofficial ambassador of Pittsburgh Webloggers and comments on more member blogs than I could shake a stick at. I, on the other hand, haven't read many local blogs, so I didn't even know the electronic personas of most of the attendees. Thankfully, many were outgoing enough to approach me and save me from myself. 😉

"Professors from Pitt and Duquesne contribute on other blogs, and elsewhere a young couple named Erik and Kelly Dahl have an audio version of the blog, or podcast, where they record things going on in their lives. At Thursday's party Erik Dahl had a mike clipped to his polo shirt, recording his conversations with other bloggers."

I had no ideas the Dahls were recording at the fest. I look forward to hearing what Erik got.

"One of the most interesting sites in the city is Williams' 'Ales Rarus' blog, where the grad student in intelligent systems at Pitt, and a convert to Catholicism, posts his witty and fresh takes on everything from religion to Howard Stern to stem cell research, while never seeming to have a preordained opinion."

Holy cow! That was unexpected. Wow. Thanks. *blush* I guess the pressure's on to produce more great content in the future. *nervous fidgeting* 😉

"A beer in hand, Williams talked about the unique site, where discussions about labor practices at Wal-Mart share space with an encyclical by Pope Paul VI."

There are some good folks who deserve to take the credit with me – perhaps even away from me. Jerry Nora writes most of the stem cells posts. As a med school student and bioethics hobbyist, he's more qualified than I to argue effectively on such topics. The posts about labor practices were written by Lightwave, a professional computer geek who has an MBA. The reflection on Humanae Vitae was written by edey, a gentle soul with a bleeding heart wrapped in brutal honesty, who was once upon a time was fiercely pro-choice.

To be sure, I still write a lot of my own posts. However, I'm more interested in fascilitating intelligent and fruitful discussion than keeping this soap box to myself. To that end, I harass my friends to hop on as often as they're willing. I'm in debt to them for their unique and meaningful contributions.

"'One of the things that keep me going is I don't go in for the cookie-cutter vibe of blogosphere,' Williams said."

Again, I'm not sure that's quite how I spoke, but it's close enough. What I'd add, though, is what I meant by "cookie-cutter". Most of the political blogs I've read are either rabidly liberal or fanatically conservative. There's not much in the middle. Furthermore, most political blogs are just that, with little time given to other issues. Most of the religious blogs I read are either by conservative evangelicals or so-called progressives. Again, there's not much in the middle. The rest of the blogosphere seems to be dominated by personal journals, which I consider to be a different species from blogs and in which I have no interest.

My impetus to blog derives primarily from the belief that I can't possibly be alone. There have to be other "extreme centrists" out there who feel just as unconfortable when called moderates as when they're called liberals or conservatives (whether it be in politics, religion, or elsewhere). People in "purple" America are underrepresented. I blog as someone fed up with two-party politics, embarassed by Christian infighting, and an overwhelming urge to learn as much as I can about life, the universe, and everything.

For more about the PG article, check out Rob's contribution at UnSpace. Also worth highlighting is his excellent summary of the BlogFest.

As an added bonus, here are some past Post-Gazette articles on blogging in Da Burgh: