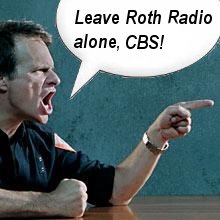 When Howard Stern left terrestrial radio (thank God) and moved to satellite, he left a gaping hole in morning drive radio. Infinity Radio decided to replace Stern with David Lee Roth in some markets (including Pittsburgh), and I think it was of the few smart decisions they’ve ever made. Diamond Dave’s show rocks.

I’m the kind of guy who usually hates talk radio in the morning. The last thing I want to hear when I’m still half asleep on the way to work is a bunch of idiots trying to be funny and failing. I want music. Better yet, I want music that’ll wake me up. If I must listen to talk, it better be good. When Stern was polluting the terrestrial airwaves, I avoided him like the plague. His adolescent shanigans were old 10 or 15 years ago. I only found him interesting at the end because he stopped being perverted long enough to talk about the real issues surrounding how his bosses were stifling his free speech, generally behaving like asses, and having no appreciation for the man who made them filthy rich. But I digress.

When Roth replaced Stern, I decided to give him a shot. I figured since almost every decent rock station has talk shows on in the morning, I’m pretty much stuck listening to one. Maybe Roth Radio will be good. Well, it is. In fact, it’s better than good. David Lee Roth is a breath of fresh air for morning drive radio. He is intelligent, funny, fair to his callers, has interesting guests, cool people in the studio, and his format is not the same ol’ song and dance. In short, he’s not only the least of evil morning talkers, he’s interesting to listen to. I actually look forward to tuning in and I’m bummed when I forget to.

Dave’s producers, though, want to change all that. The ratings haven’t been what they’d hoped for. So he’s lost most of Stern’s audience, so what? Who wants folks who act like their IQ is lower than their shoe size? Tom Chiusano and his overlord (whose name I’ve forgetten) want Dave to change his format entirely in order to better cater to the demographic that matters to them, white Generation X males whose favorite style of music is classic rock. Well, I’m a white Generation Y male who digs classic rock and I don’t want Roth to change a thing. If you feel the same way, save a copy of the above graphic, put it on your site, and spread the word. Let’s overwhelm Infinity with a grassroots Roth revolution!

Addendum 03/09/06: Here’s some additional info that should make it clearer what kind of crap Roth is dealing with.

"After David Lee Roth’s bosses had a little talk with him about ways to improve his low-rated morning program, Roth cut loose on the air Wednesday morning, calling his superiors ‘social retards’ and ‘beige baby-food sissies.’ He was referring to WFNY/New York station manager Tom Chiusano and CBS Radio programming VP Mark Chernoff. ‘They want me to copy Howard [Stern],’ Roth said, according to the New York Daily News. ‘But I refuse to regiment this show… I told them I would quit if they will not let me do what I was hired to do, which is create something unique.’"

"Roth explained that his bosses told him he should appeal to ‘a 35-year-old white male who likes Lynyrd Skynyrd’ and that they asked him to stop using ‘foreign’ and ‘ethnic’ music for soundbeds. He responded by saying, ‘This show isn’t designed for a demographic. It’s for everyone.’"

"Roth did admit that his show was rocky for the first four weeks, saying, ‘I was like a fish flopping around at the end of a stick.’ But he said he’s a quick study and noted Stern’s comments to Sean Hannity on the Fox News Channel where he said a new radio show can’t be judged for 15 or 20 months. ‘Howard took his old audience,’ Roth said. ‘We’re after a new one.’"