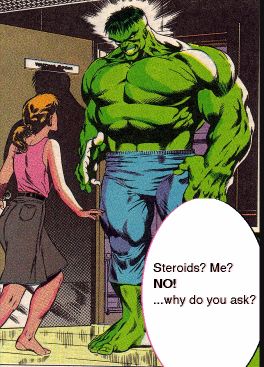 So Rafael Palmiero failed a drug test. Maybe he's guilty of steroid use. Maybe he's not. It doesn't really matter. Even if he is, I'm sure he'll only get a slap on the wrist from the league. Heck, Darryl Strawberry got more chances than cats have lives. On the other hand, Pete Rose was caught gambling once and will never be eligible for the Hall of Fame. The league is basically saying, "You can do all the drugs you like; we'll forgive you. However, if we catch you gambling on baseball, may God have mercy on your wretched soul."

I think MLB's policies toward drug use – steroid, narcotic, whatever – should be made tougher. I'd be tempted to suggest a zero-tolerance policy, but I'm a big fan of second chances, so I'd be happy with a 1-warning policy. The first time a player's caught, in addition to whatever punishment the league imposes, he should be told that the next offense will result in being banned from the league.

This brings to mind a far more serious problem – multiple DUI convictions. Take this woman for example. She's been convicted of DUI charges nine times before and is only facing prison time (and finally having her license revoked for life) now because she injured another driver. What the heck?! Thirteen charges and ten convictions and she's only now losing her license for life and spending a measly eight years in prison?! People get worse sentences for tax evasion!

In my not-so-humble and rather fed-up opinion, I think the federal government should force states to enact tougher DUI laws. Since Congress can't constitutionally make nation-wide traffic laws, they "encourage" states to make the changes they want by threatening to withhold road maintenance funds. They could easily apply that technique to pushing for tougher DUI laws.

What sort of laws would I want? Just look at my above baseball drug policies to know. I think drunk or drugged drivers should get a warning and appropriate punishments for the first offense. If there's a second offense, the driver's license should be revoked for at least twenty years, if not for life. If, however, the first offense resulted in a death, there would be no second chance and the license would be revoked for life. If driver is convicted of DUI while driving with a license suspended because of a prior DUI conviction, the license should be revoked for life and the driver should serve some jail time. I could go on and explain other particular scenarios, but I think you get the picture.

Drunk and drugged drivers get treated too nicely in this country. If we don't stop slapping them on the wrists, they won't stop driving under the influence of drugs and alcohol. I'm all about forgiveness and second chances, but just because I forgive you, doesn't mean I trust you behind the wheel of an automobile.

It was one of the most exciting Superbowl’s I’ve ever watched. Hopefully, the Eagles
will get there again next year and win.

On a side note, the numerous miscues and mistakes by the Eagles players and coaches
weren’t the most annoying aspect of this loss. That honor goes to the announcers.
I really wish I lived close enough to Philly to pick up a radio broadcast of the
game (assuming there was one). Those guys make John Madden sound intelligent and
entertaining. Heck, Dennis Miller would have been less irritating. *grumble*

I had hoped that we'd see a Turnpike Bowl this year, but alas and alack, the Steelers crumbled under the pressure. At least I'll get to see the Eagles in the Superbowl. The last time they made it I was only 3 years old!

It's going to be a tough game. The Steelers would have been an easier team to beat. The Patriots look really good. The Eagles better come out with their 'A' game and pull out all the stops. Anything less will send them home without rings.

The Olympics bore me. I haven’t been excited about them since I was a kid. A lot
of that has to do with the detritus that grows every four years – the list of sports
nobody really cares about. I think IOC should wipe the slate clean and start from
scratch. Do we really need synchronized swimming, for instance? That may be an art
form to someone, but it’s not a sport. Neither is ballroom dancing. There’s talk
of making “dance sport” an Olympic event. I’ve done ballroom dancing before.
It’s art, not sport. Anyhow, room should be made for popular competitive sports,
such as ultimate frisbee. The sad thing is, with the number of events currently
bloating the Games, if ultimate was added, it’d probably be broadcast at 4 AM. *sigh*
One more thing: Ban professionals from the Games!!! “Amateur” comes
from Latin for “lover”, i.e. an amateur one who plays for the love of
the game. That’s who should be competing in the Games, not a bunch of spoiled millionaires.

All of that ranting was actually a digression. My original gripe started with this
BoingBoing article. The basic gist is that the Olympics were a huge ratings
and advertising success, so you’d think the networks would jump at the chance to
put on a similar spectacle. You’d be wrong. The Paralympics will not be aired on
American television. No offense to Olympic athletes, but I think handicapped athletes
are far more impressive and worth my viewing time and applause. It’s a shame that
Americans won’t get to see some real winners. I’m not talking about winning gold
medals. I’m talking about overcoming adversity and thriving in the face of it.