Some recent unpleasant interactions between Christians have been weighing on my conscience. As I sat in eucharistic adoration this morning, I asked God what I should have done/be doing. Just before leaving the chapel, I prayed morning prayer of the divine office and the scripture reading was this:

“Let no evil talk come out of your mouths, but only such as is good for edifying, as fits the occasion, that it may impart grace to those who hear. And do not grieve the Holy Spirit of God, in whom you were sealed for the day of redemption. Let all bitterness and wrath and anger and clamor and slander be put away from you, with all malice, and be kind to one another, tenderhearted, forgiving one another, as God in Christ forgave you.” – Ephesians 4:29-32

I think God wanted me to remind myself and others of this teaching. While I’m on the subject, I’ll throw in the following for good measure.

“[T]he whole law is fulfilled in one word, ‘You shall love your neighbor as yourself.’ But if you bite and devour one another take heed that you are not consumed by one another…If we live by the Spirit, let us also walk by the Spirit. Let us have no self-conceit, no provoking of one another, no envy of one another.” – Galatians 5:15,25-26

From The Ladder of Divine Ascent by St. John Climacus:

"You wish, or rather, have decided, to remove a splinter from someone? Very well, but do not go after it with a stick instead of a lancet for you will only drive it deeper. Rough speech and harsh gestures are the stick, while even-tempered instruction and patient repremand are the lancet. ‘Reprove, rebuke, exhort,’ says the Apostle (2 Tim 4:2), not ‘batter.’"

"Malice is an exponent of Scripture which twists the owrds of the Spirit to suit itself. Let the prayer of Jesus [i.e., the Lord’s Prayer, a.k.a. the Our Father] put it to shame, that prayer which cannot be uttered in the company of malice."

"If after great effort you still fail to root out this thorn, go to your enemy and apologize, if only with empty words whose insincereity may shame you. Then as conscience, like a fire, comes to give you pain, you may find that a sincere love of your enemy may come to life."

"A true sign of having completely mastered this putrefaction will come not when you pray for the man who offended you, not when you give him presents, not when you invite him to share a meal with you, but only when, on hearing of some catastrophe that has afflcited him in body or soul, you suffer and you lament for him as if for yourself."

"I have rebuked people who were engaged in slander, and, in self defense, these evildoers claimed to be acting out of love and concern for the victim of the slander. My answer to that was to say: ‘Then stop that kind of love, or else you will be making a liar out of him who declared, ‘I drove away the man who secretly slandered his neighbor’ (Ps. 100:5). If, as you insist, you love that man, then do not be making a mockery of him, but pray for him in secret, for this is the kind of love that is acceptable to the Lord. And remember – now I say this as something to be pondered, and do not start passing judgment on the offender – Judas was one of the company of Christ’s disciples and the robber was in the company of killers. Yet what a turnabout there was when the decisive moment arrived!"

"Fire and water do not mix, neither can you mix judgment of others with the desire to repent. If a man commits a sin before you at the very moment of his death, pass no judgment, because the judgment of God is hidden from men. It has happened that men have sinned greatly in the open but have done greater good deeds in secret, so that those who would disparage them have been fooled, with smoke instead of sunlight in their eyes. So listen to me, all you accountants of other people’s faults, listen well: for if, as is certain, it is true that ‘you shall be judged with the judgment you have used yourselves’ (Matt. 7:2), then whatever sin of body or spirit that we ascribe to our neighbor will surely fall into ourselves."

"You can always recognize people who are malicious and slanderous. They are filled with the spirit of hatred. Gladly and without a qualm they slander the teaching, the doings and the virtues of their neighbor. I have known men who secretly had committed very grave sins and had not been found out, yet cloaked in their supposed goodness they lashed out against people who had done something minor in public."

"To pass judgment on another is to usurp shamelessly a prerogative of God, and to condemn is to ruin one’s soul."

"Do not condemn. Not even if your very eyes are seeing something, for they may be deceived."

Harmonious interaction between bloggers, particularly Christian bloggers, is very important to me. Blogs have tremendous potential for bringing folks of diverse backgrounds together. They can also contribute to fracturing the Body Christ. One courtesy I ask of my commenters is to use "interpretive charity" (aka charitable interpretation). It means, among other things, that we should imagine the blogger or commenter we're about to smite with a withering retort as our dear, sweet grandmother. It also means we should attempt to address in advance ways in which our statements might be misunderstood. Why? Well, apparently textual communication leaves something to be desired. The following statements about email could easily be applied to blogging.

"Though e-mail is a powerful and convenient medium, researchers have identified three major problems. First and foremost, e-mail lacks cues like facial expression and tone of voice. That makes it difficult for recipients to decode meaning well. Second, the prospect of instantaneous communication creates an urgency that pressures e-mailers to think and write quickly, which can lead to carelessness. Finally, the inability to develop personal rapport over e-mail makes relationships fragile in the face of conflict."

"To avoid miscommunication, e-mailers need to look at what they write from the recipient's perspective… One strategy: Read it aloud in the opposite way you intend, whether serious or sarcastic. If it makes sense either way, revise."

"There's nothing I like less than bad arguments for a view that I hold dear." – Daniel Dennett

"Nothing" is a bit strong for me, but I appreciate the sentiment. Those following the exchange between this blog and Ambivablog should read this post at Heart, Mind, Soul, and Strength.

"It's difficult for me to read much of the debate over homosexuality without becoming annoyed at both sides, despite the fact that one of the sides is 'my' side. And it's not just the extremists throwing used condoms at priests on the left or picketing funerals on the right. Here are my pet peeves that you see often enough even among reasonable people." 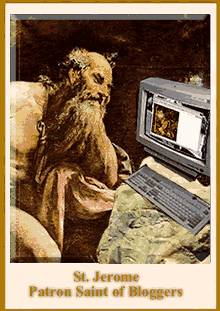 I’m worried that Christian bloggers have lost the plot.

My grandfather used to say that the habits or faults of other people that annoy us the most may be ones we are also guilty of. I guess that was his atheistic Quaker version of Luke 6:41. I am very often reminded of that lesson and it has been an important part of my maturation process and growth in faith. It’s a lesson I have to relearn over and over again. It’s painful; the saying is true – no pain, no gain.

There are times (too many to count) God puts me in a situation in which I find myself correcting someone for a fault I too am guilty of. Sometimes I get sort of a “spider sense” feeling as I reprove a friend, knowing all the while that I’ll learn Pop-pop’s lesson before I’m through. Other times, I’m too blinded by my own self-righteousness to see what’s coming. It’s a very humbling a experience either way.

What I’m trying to say is that the irony of this post is not lost on me. How can I reprove others for a sin I’m just as guilty of? This isn’t going to be a self-righteous lecture. If you insist on believing it is, then imagine me as the recipient rather than the deliverer.

If I had to summarize in one sentence the main reason I blog and how I choose what to blog about, I’d say that I’d like to help people stop begging questions, talking past one another, and calling each other silly and rude names, and start thinking critically, listening to one another, and treating each other with, at minimum, the same love they’d ask for themselves. That, of course, is easier said than done. Popular legend has it that G.K. Chesterton, among other eminent authors of his time, was asked by a newspaper to write an essay on the theme “What’s Wrong with the World?” His reply? “I am.” When it comes to the kind of acerbic and caustic blogging that I believe is poisoning the Body of Christ, and the rest of the world for that matter, I too am guilty.