The primary season inspired me to revisit a couple political compass quizzes. Here are the results. 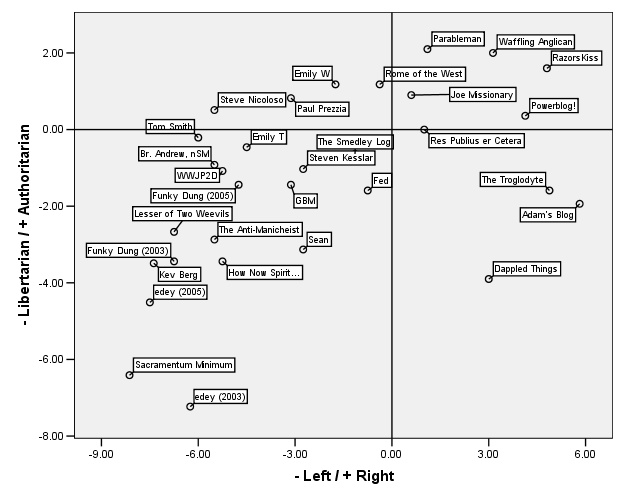 A while back I asked my readers to take a political quiz and report their results. I’ve taken those results and plotted them. Bear in mind that they only represent my readers. I’m not looking to replicate a blogosphere-wide map. If you’re one of my readers and you’d like to be on this map, take the quiz and leave a comment with your coordinates.

Addendum 11/27/05: I thought perhaps some readers might be interested in posting their coordinates from this quiz as well. Notice the linear dependecy of y on x in the first quiz? Well, this quiz corrects for that. Be sure to give your unnormalized scores. 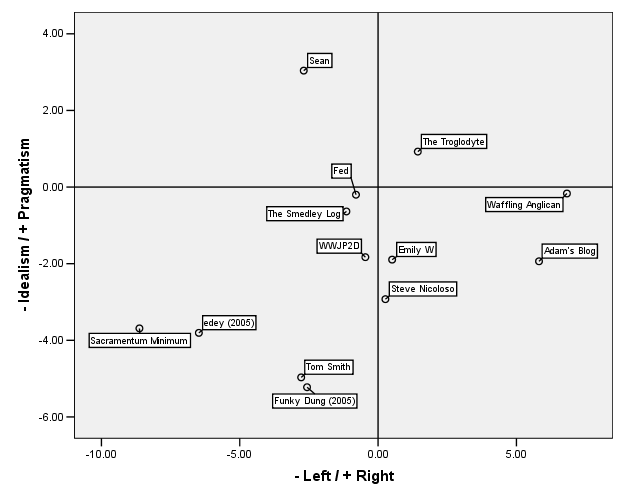 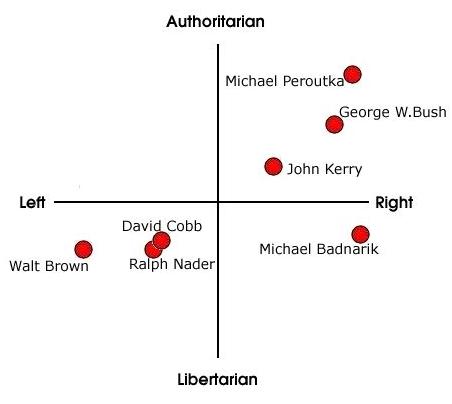 END_OF_DOCUMENT_TOKEN_TO_BE_REPLACED

I've heard some people say that bloggers who want to "make it big" shouldn't participate in or spread frivolous memes (e.g. quizzes). I happen to think that in moderation memes can be useful tools for learning a little more about the people behind the keyboards. In that spirit, here's my overdue response to a tag from Fr. Jim Tucker of Dappled Things to participate in the bedside meme, in which one lists whatever is atop one's nightstand(s).

, Liturgy of the Hours

I really don't feel like tagging anyone for this meme. However, if you feel inspired to participate because of this entry, please leave a trackback ping. 🙂

The
myriad of memes that cross-cross the blogosphere testify to bloggers’ pleasure in
answering questions. Why not put that to good use? That’s
just what some folks at MIT are doing.