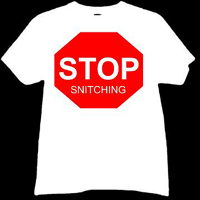 This must be one the stupidest, most asinine things I have ever encountered.

"PITTSBURGH — It was not the first time prosecutor Lisa Pellegrini had been enraged by the sight of the T-shirt with the traffic-sign message: STOP SNITCHING. But this guy was about to wear one into court, with matching baseball cap."

"Worse, he was a witness — her witness — and the intended victim in an attempted murder case that had brought him, her and the defendants to court that day last fall."

"This was Rayco 'War' Saunders — ex-con, pro boxer and walking billboard for a street movement that has sparked a coast-to-coast beef involving everyone from professors to rappers."

"Pellegrini, thinking 'witness intimidation,' told Saunders to lose the hat and reverse the shirt. Saunders, crying "First Amendment," refused. He left the courthouse, shirt in place. Case dismissed. 'In almost every one of my homicides, this happens: 'I don't know nothin' about nothin', ' the prosecutor says. 'There is that attitude, 'Don't be a snitch.' And it's condoned by the community.'"

"Omerta, the Mafia's blood oath of silence, has been broken by turncoat after turncoat. But the call to stop snitching — on other folks in the 'hood — is getting louder."

"Is it an attempt by drug dealers and gangsters to intimidate witnesses?"

"Is it a legitimate protest against law enforcers' over-reliance on self-serving criminal informers?"

"Or is it bigger than that?"

It's freakin' retarded is what it is. We're not talking about hiding innocent people from a police state. We're talking about covering up for street thugs and hoodlums – drug dealers, murderers, and the like.

"The hip-hop star has refused to cooperate with police investigating the slaying of his bodyguard Feb. 5 outside a Brooklyn studio where Rhymes was recording a video with performers such as Missy Elliott and Mary J. Blige. Police say that although Rhymes and as many as 50 others may have seen the shooting, no one came forward — an echo of the silence that followed the unsolved murders of rappers Tupac Shakur, the Notorious B.I.G. and Run-DMC's Jam Master Jay."

"It's the code of the street: To be a credible rapper, you have to know when to shut up."

Can I be cool like these guys when I grow up, Mommy? Just how much crack are these idiots smoking?

"Alexandra Natapoff, a professor at Loyola Law School in Los Angeles, says that, based on federal statistics, one of every four black men from 20 to 29 is behind bars, on probation or on parole, and under pressure to snitch. She estimates one in 12 of all black men in the highest-crime neighborhoods are snitching."

"She says informers strain the social fabric of poor minority neighborhoods, where as many as half the young men have been arrested. "Every family gathering, every party, every backyard barbecue probably has someone who's secretly working as an informer."

"This is the world Rayco Saunders inhabits. It's filled, as he puts it, with 'guys doin' all this crime and not doin' no time, because they're telling on the next man.'"

Perhaps if "the next man" and so many of his friends weren't living on the wrong side of the law, there wouldn't be anything to snitch about. Shocking concept, ain't it?

"The black community is divided. Rapper Chuck D of Public Enemy has blasted the Stop Snitching campaign on the hip-hop group's website: 'The term 'snitch' was best applied to those that ratted revolutionaries like Huey P. Newton, Bobby Seale, Che Guevara. … Let's not let stupid cats use hip-hop to again twist this meaning for the sake of some 'innerganghood' violent drug thug crime dogs, who've sacrificed the black community's women and children.'"

It's good to know not all rappers let their brains ooze out their ears.

"Don't give [a criminal] immunity to do what he wants on the street." In order for that to work, though, there'd have be some degree of national unformity in how minor crimes are investigated, prosecuted, and sentences. People nabbed for minor crimes would need to know that they're going to jail one way or another. The best they can do is shorten the sentence.

"If that is your only outlet, to call the police, that's what you do." Umm…what other outlet is there? Vigilantism? Retribution?

"I've been wronged by the system. Do you think I would help the system?" So instead of lighting a candle, you want to curse the darkness. Asshat. "Do cops snitch on other cops?" Now that is a serious problem. The blue code of silence must come to and end.

"Sometimes you must right wrongs yourself." I'm all for taking personal responsibility for one's actions, but I don't think that's what Saunders means. He seems to be hinting at vigilantism, which is rarely a good idea.

"Later, he's out on the street, wearing one of the T-shirts. Standing nearby is a woman dressed as the Statue of Liberty to advertise the services of her employer, Liberty Income Tax."

She looks at Saunders, whose muscular chest bulges beneath the T. "I'd wear one of those," she says.

Aye, there's the rub. Maybe Whitaker's nephew was guilty of a crime. Maybe not. Either way, he should be able to report a crime he's witnessed without fear of intimidation. That's not being a paid snitch. That's being a responsible citizen.