More people need to read this.

"In the wake of Hurricane Katrina, some commentators are jumping to the conclusion that global warming is responsible for its destructiveness. While there is a theoretical possibility that higher ocean temperatures could lead to more powerful hurricanes, no individual hurricane can be shown to be so affected. Moreover, most scientists who study hurricanes believe that we are moving from a period of low hurricane activity to one of greater activity – change not caused by global warming. So, arguing that Katrina’s ravages are the result of climate change commits a causal fallacy."

"2. Most scientists who study hurricanes believe that they are becoming more severe due to cyclical changes which have nothing to do with global warming, so it may be that all of Katrina’s destructiveness was due to these other causes. If this were not the case, there would be a plausible argument that global warming was responsible for Katrina’s excessive destructiveness for lack of an alternative explanation. However, there is an alternative. Now, I am not a scientist who studies hurricanes myself, so I’m relying upon press reports for the expert opinions of those who do (see the Resources below). Of course, press reports are not always reliable, so caveat lector."

SaveOurEnvironment.org said the following prior to debate.

"The pending legislation does next to nothing to advance these principles. Instead, it includes the following provisions that would increase our reliance on oil and widen the federal budget deficit."

limit the rights of states and local citizens to participate in decisions related to the location of liquefied natural gas and other energy facilities and the content of hydropower dam licenses;

open the door to oil drilling in the Western Arctic Alaska and offshore without setting aside key wildlife areas for protection and conducting a seismic inventory of oil and gas off the Florida, North Carolina and other coasts that could harm fish, waterfowl and other marine inhabitants.

Thankfully, the bill passed without a provision for drilling in ANWR. Still, the bill is deeply flawed and I'm displeased with my congressmen for supporting it.

How did your congressmen vote? 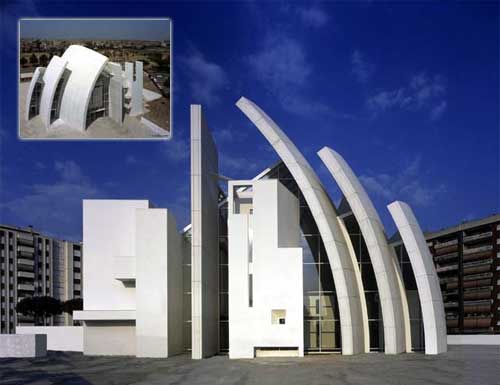 “Using technology already available for self-cleaning windows and bathroom tiles, scientists hope to paint up cities with materials that dissolve and wash away pollutants when exposed to sun and rain.”

“This is the idea: UV rays hitting the titanium dioxide trigger a catalytic reaction that destroys the molecules of pollutants, including nitrogen oxides, which are emitted in the burning of fossil fuels and create smog when combined with volatile organic compounds.”

“The catalytic reaction also prevents bacteria and dirt from sticking to a surface, making them easily removed by a splash of water or rain.”

On a side note…

Smog is a terrible thing and certainly contributes to greenhouse gases in the atmosphere, but there is mounting evidence that not all air pollution is man-made. To wit:

“Humans apparently aren’t the first species to change the climate of the planet. Bacteria living 2.3 billion years ago could have plunged the planet into deep freeze, researchers at the California Institute of Technology claim in a new report.” 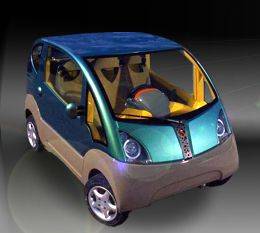 This
is an incredibly cool concept. More people need to use their imaginations like
this if we are to have any real chance of reducing dependency on petroleum.

“After twelve years of reserch and development, Guy Negre has developed an
engine that could become one of the biggest technological advances of this century.
Its application to CAT vehicles gives them significant economical and environmental
advantages. With the incorporation of bi-energy (compressed air + fuel) the CAT
Vehicles have increased their driving range to close to 2000 km with zero pollution
in cities and considerably reduced pollution outside urban areas.”

“As well, the application of the MDI engine in other areas, outside the automotive
sector, opens a multitude of possibilities in nautical fields, co-generation, auxiliary
engines, electric generators groups, etc. Compressed air is a new viable form of
power that allows the accumulation and transport of energy. MDI is very close to
initiating the production of a series of engines and vehicles. The company is financed
by the sale of manufacturing licences and patents all over the world.”

I had just read a Smedley Log entry on home
energy conservation when I saw today this article in the Post
Gazette, which
discusses
“energy leaks” in many modern appliances: