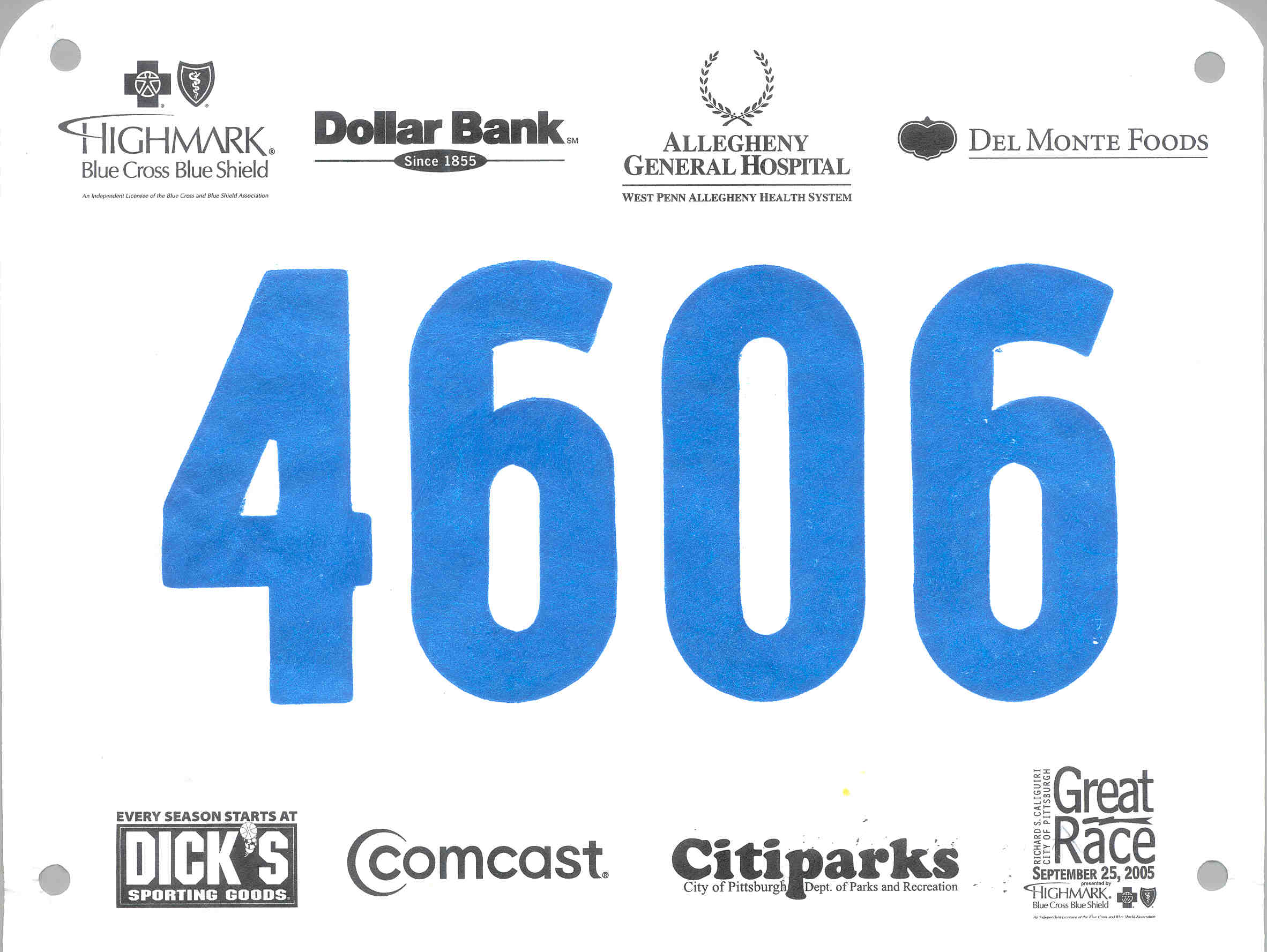 Today I ran my first 10K race. 🙂 It was the Richard S. Caliguiri Great Race.

I met up with Rob Carr at the ambulance behind the starting line. My wife took a picture of us. As soon as that roll of film gets developed, I'll post my Run Shadyside and Great Race pics.

Rob and I ran the first mile together. He was worried about his knee and I was worried about setting too fast a pace, so we took it slow. As it turned out, we took it slower than either of us really wanted (about 13 minutes as I recall). After the first mile, I split off from Rob and picked up my pace. Having looked at Rob's chip time, it seems I didn't out-pace him by much. I finished in 1:04:55 according to my watch (1:06:13, officially ) and he finished in 1:09:41. I probably put about a minute's distance between us when I left him and just held on to it, accumulating another minute of separation with each mile. Had I known Rob was going to be so close behind me, I'd have stayed with him so we could push and support each other. Oh well.

Anyhow, I didn't finish in under an hour like I wanted to, but I'm not too disappointed. I'm mostly glad I finished. That was the first time I ran 10K without stopping. During training, I always stopped at about 5K, got water and walked around a bit before running the remaining 5K. I have something to shoot for next year.

I learned some things at this race (Learning make me happy).

1. I need new sneakers. I've put too many miles on the ones I have.
2. The bananas and other goodies at the end of the race run out fast. I should ask my wife to bring energy food for me next time.
3. A heck of a lot of people show up for this race. Have a meeting place in mind for after the race or I'll be wandering around aimlessly for while.

"Heat, though, was a problem….I was extremely hot. I wasn't so hot that I was dumping ice down my shorts, but this race was too humid and warm for me."

Amen to that. I wish the weather had stayed cool like it was at the start.

"I didn't see any caterpillars, or much in the way of costumes at all this year. Usually I'm with the some ROTC guys with a flag for part of the run, but I didn't see them, either."

That was disappointing. I'd have loved to have seen people being silly and having fun like that.

"Just before the 4 mile mark, there's the unofficial 'water' station that handed out beer. "

What was up with that?! Who the heck wants booze during a race?!

"At Eat-n-Park's water station, there were some cheerleaders, which was fun."

To those who cheered, I offer a hearty thank you. You were much appreciated. I only wish there had been more of you, especially during miles 5 and 6.

"Someone was sick at a bit past the 4 mile mark, but for once there were enough people that there was no need to stop. I have about a 50% chance of someone getting injured and stopping when I run the Great Race. Usually, it's right before the two-mile mark where the crowd pinches down as it makes the turn off Forbes by CMU onto Morewood. People run into each other at the turn and someone falls, winding up with significant road rash (abrasions with little bits of asphalt and rock imbedded in the skin – not fun!). Come to think of it, the 'just past the 4 mile mark' is a popular spot, too."

At both locations water is distributed. The asphalt is wet and the street is littered with plastic cups, which on wet road can be as slippery as banana peels.

"Well, I survived. There was no way I'd be happy with the time unless it was sub-40 minutes. I've never gone sub-40, so that wasn't likely to happen. Still and all, it was a great workout. There were people behind me, and I was running in a crowd, so I didn't get the worst time of the day."